Dancing electrons lose the race, this week in Science

An international team of physicists from DIPC and CFM, jointly with scientists from various German universities, timed with great precision an electron emission experiment and explained why the fastest electrons ended up arriving in the last place.

The study reported in Science, takes us a little bit deeper into the understanding of a new frontier in physics, the realm of the attoseconds. 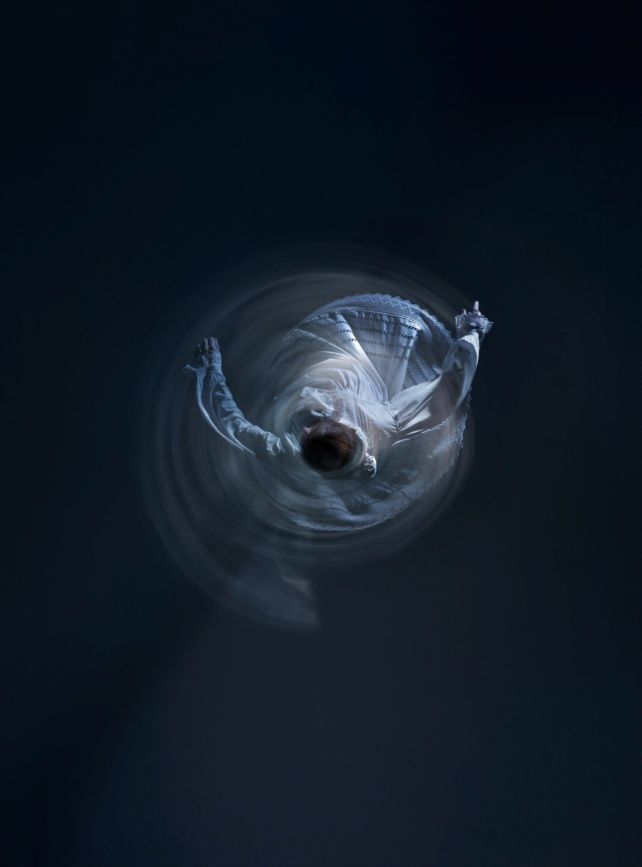 Figure: The photography shows a dancer spinning around its centre as a simile of the electron trapped and “dancing” around the atomic nuclei before being emitted. In the experiment, an electron emitted from a tungsten atom in the second atomic layer of the semiconductor tungsten diselenide (WSe2), starts its trajectory with an orbiting motion and only after some time, the straight flight from the emitter atom takes over. The electron orbiting or “dancing” depends on the initial state and thus varies between tungsten and selenium atoms and different initial states. Ultrashort pulses of light were employed to time the race between different emission channels with 10-17 seconds precision. (Credits – Photography: López de Zubiría / Artistic direction: Santos Bregaña / Dancer: Itsaso Gabellanes)

Even more than 100 years after Einstein’s explanation of photoemission the process of electron emission from a solid material upon illumination with light still poses challenging surprises. In the report, now published in Science ultrashort pulses of light were employed to start a race between electrons emitted from different initial states in a solid material. Timing this race reveals an unexpected result: The fastest electrons arrive in the last place. The motion of an emitted electron is strongly affected by interactions inside the atom from which the electron is emitted. Electrons photoemitted from a surface remain trapped for a while, dynamically confined by the centrifugal barrier around the atoms. The motion of these electrons around the nuclei, before being eventually emitted, is kind of a dance leading to an intuitive picture that the electrons that remain longer dancing around the atom lose the race and are emitted last. In contrast, electrons going straight win the race. This observation required a revision of common theoretical models describing the photoemission from solids, i.e. this initial intra-atomic interaction had to be taken into account and sets a new cornerstone for future improved models of the photoemission process from solids.

Experimentally resolving the tiny delays in the photoemission process required timing the emission event, i.e. the moment when the electron leaves the material, with an unprecedented resolution of 10-17 seconds. Usain Bolt would run in this time interval a distance corresponding to the tenth of the radius of an atomic nucleus and even light propagates only 3 nm (3·10-9 m). This hardly conceivable resolution allows timing the race of electrons in experiments that were performed at Bielefeld University (Germany) using advanced attosecond time-resolved laser spectroscopy. The choice of tungsten diselenide as material turned out to be essential: It provides four photoelectron emission channels with different initial state properties and the outstanding stability of the surface enabled long-term data collecting improving the statistical significance.

For the explanation of the electron race outcome a close collaboration with a team of theoretical physicists at the Donostia International Physics Center and the Material Physics Center  (CFM) proved essential. Quantitative modelling of the intra-atomic processes and the electron propagation in the semiconductor crystal demonstrated that the initial orbiting motion shall not be neglected if the dynamics of the photoemission process from a solid is considered. Still, the achieved theoretical model represents just a first step in the interpretation of the measured electron race since intra-atomic motion and propagation in the crystal are treated separately. In the future, these processes shall be treated in a unified approach and the thus improved theory of photoemission will open new possibilities to experimentally test and improve our understanding of the very fundamental process of photoemission.

The reported advances in understanding photoemission from solids became feasible based on recently developed attosecond laser techniques. Control of light with attosecond (10-18 second) resolution opens fascinating views on electron dynamics on the atomic scale. Whereas femtosecond (10-15 second) spectroscopy served to study and control atomic motion, attosecond spectroscopy now directly addresses the fundamentals of the interaction of light with matter. Besides an improved fundamental understanding these techniques offer possibilities to control light driven electronic processes. The applied spectroscopy relies on the acceleration and deceleration of emitted electrons in an intense time-dependent electric field. Based on an improved understanding of the photoemission process itself this will serve in future experiments to resolve variations of light fields with sub-atomic resolution, i.e. on a scale that was not accessible up to now.