Emakumeak Zientzian [Women in Science] has received the first STEAM Euskadi Prize and the Special Mention Award for Gender Perspective in the category of Most Innovative Initiative in STEAM Education promoted by other organizations. The STEAM Euskadi awards are given by the Basque Government´s Department of Education and the ceremony took place this morning in Bilbao. The project was selected among 137 applications submitted to the call for proposals. 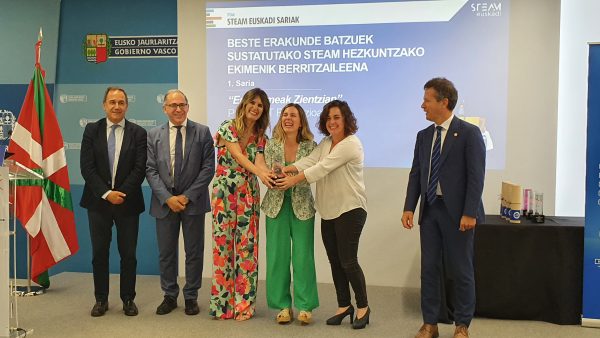 The award acknowledges the progress made by the Emakumeak Zientzian initiative since the first edition in 2017, and the work of all the people and organizations involved in its development. Emakumeak Zientzian has been proposing an extensive program of activities geared towards society as a whole to mark 11 February, International Day of Women and Girls in Science, with emphasis on particularly important groups in order to promote equal access and professional development in STEM disciplines.

“If there is one thing we are clear about, it is that breaking the gender divide in the scientific and technological field requires a global awareness; a global approach,” stressed Mónica Moreno, head of projects and communication at POLYMAT and coordinator of the 2022 edition of Emakumeak Zientzian. “Over 100 researchers have made it possible to organize almost 40 activities that seek to instill an egalitarian scientific ethos across society: children, families, teenagers, adult women, teachers and schools,” added Moreno.

“Emakumeak Zientzian makes the work of women researchers in the Basque Country visible, it creates references and breaks the typically male roles attributed to scientific and technical activities,” said Itziar Otegui, head of communications at CIC nanoGUNE and coordinator of the 2022 edition. “This initiative has also made it possible to build a network of scientists committed to internal change in scientific and technical organizations in order to break the gender divide and achieve full and equal professional development for everyone,” added Otegui.

The Emakumeak Zientzian initiative seeks to make the activity of women in science visible, to break down the typically masculine roles attributed to scientific and technical activities, and to encourage girls and teenagers to opt for careers in science.

In 2017 the CIC nanoGUNE center ran a series of awareness-raising and dissemination activities to mark International Day of Women and Girls in Science (11 February); it was promoted by a group of female researchers and staff at the center. In 2018 and 2019, the Center for Materials Physics (CFM CSIC-UPV/EHU), Donostia International Physics Center (DIPC) and CIC biomaGUNE joined the Emakumeak Zientzian initiative and the four centers organized a more comprehensive program of activities. In 2020, POLYMAT, Tecnun, CEIT, Biodonostia and Elhuyar joined the project, bringing the total number of organizing bodies to nine. In 2021, despite the health crisis caused by the pandemic, the Faculty of Computer Science of the UPV/EHU-University of the Basque country and Eureka! Zientzia Museoa [science museum] joined the initiative, and the obstacles of COVID-19 were overcome to offer a program of predominantly virtual activities in February 2021.

The 17 organizing bodies brought together by the 6th edition of Emakumeak Zientzian in 2022 are a significant representative sample of the Basque Country’s science and technology base. This bringing together is the result of an Emakumeak zientzian ‘open-door’ initiative, which is aspiring to be a unifying force, and is convinced that we are better off as a result of joining forces. So in this 2022 edition, the organizing bodies of the Emakumeak Zientzian project are POLYMAT, CIC nanoGUNE, Donostia International Physics Center (DIPC), the Center for Materials Physics (CFM CSIC-UPV/EHU), CIC biomaGUNE, Biodonostia, Tecnun-School of Engineering, Ceit, Eureka! Zientzia Museoa, the Official Association of Industrial Engineers of Gipuzkoa, Basque Center on Cognition, Brain and Language (BCBL), Lortek, the UPV/EHU’s Faculty of Informatics, Faculty of Engineering –Gipuzkoa, and the Faculty of Chemistry, Elhuyar, and the Gipuzkoa Science and Technology Park.

Emakumeak Zientzian 2022 has the substantial support of the Charter Provincial Council of Gipuzkoa, and Fomento San Sebastián, as well as the collaboration of the following bodies and organizations: the Spanish National Research Council (CSIC), the Spanish Foundation for Science and Technology (FECYT), the Spanish Research Agency through the Severo Ochoa and María de Maeztu centers associated with the initiative, the Basque Film Library, the Donostia-San Sebastian International Film Festival, and Aspegi (Association of Professional, Business and Managerial Women of Gipuzkoa).

The STEAM Euskadi Prizes, organized by the Basque Government’s Department of Education, recognize Basque best practices in science and technology education. The STEAM Euskadi Prizes are in line with one of the priorities of the Basque Government, which is to promote and implement STEAM (Science, Technology, Engineering, Arts and Mathematics) Education to improve the scientific and technological capacity of students, especially of the youngest and female students.  This is the second edition of the prizes.