The European Research Council has awarded the prestigious ERC Starting Grant to the UPV/EHU researcher at the CFM, Sara Barja Martínez, with her COSAS Project 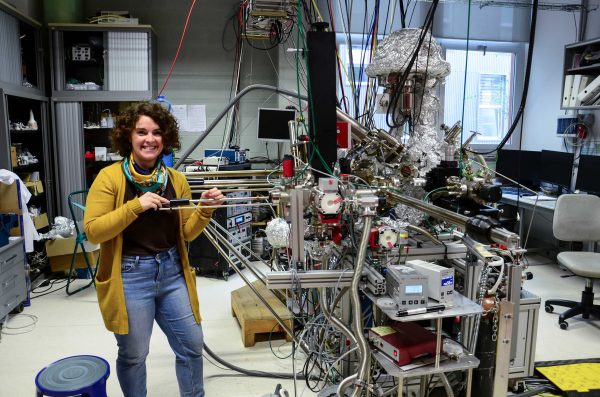 The €2.3 million grant will enable the COSAS project, whose mission is to develop new, more efficient and economical catalysts to produce green hydrogen by exploring electrolysis from seawater – thus avoiding the costly process of purifying seawater to optimise hydrogen production – to be developed over the next five years.

Sara Barja Martínez, Ramón y Cajal researcher at the University of the Basque Country and at the Centro de Física de Materiales (CFM, joint UPV/EHU-CSIC), has been awarded an ERC Starting Grant, one of the most competitive and prestigious grants awarded by the European Research Council. This programme highlights the promising work of the brightest young scientists so that they have the freedom to develop their own innovative line of research and contribute to expanding the frontiers of knowledge.

The 2.3 million euros awarded to Dr. Barja will enable the COSAS (Controlling Oxygen Selectivity at Atomic Scale) project to be developed over the next five years, which seeks to study hydrogen production processes in depth from a fundamental point of view, in order to contribute to their sustainability. The exploration of alternative energy sources and fuels to fossil fuels is in line with the Sustainable Development Goals (SDGs) set by the United Nations, and with the Basque Hydrogen Strategy defined by the Basque Government’s energy agency. This project, led by the UPV/EHU and the CFM, will give a major boost in this regard.

Of the more than 4000 proposals received, only 397 were finally selected across Europe, which represents a success rate of less than 10% and gives an idea of the highly competitive nature of these calls and the degree of excellence required of the winning projects. The COSAS project is one of those selected.

Hydrogen has been identified by European bodies as an essential element for the energy transition. The future points to the development of a global hydrogen market as a driver for the integration of renewable electric technologies into the energy system. The need for more efficient and cost-effective catalysts to produce green hydrogen is one of the main challenges in sustainable energy production from water. The most widespread approach is to “break” water into its basic components, oxygen (O2) and hydrogen (H2), but this is proving costly both economically and, above all, environmentally. Surprisingly, the understanding of these processes is still very limited. COSAS proposes to explore two alternative routes to obtain hydrogen by water oxidation. On the one hand, a reaction in which hydrogen peroxide would be obtained – oxygenated water (H2O2) instead of O2, whose economic value is greater than that of the oxygen itself – and on the other, direct electrolysis from seawater – thus avoiding the costly process of purifying seawater to carry out this process.

COSAS will explore these two reactions from a fundamental point of view, addressing questions about electrocatalytic processes that are not yet understood: what exactly happens in the small contact zone between the electrode (catalyst) and the electrolyte (aqueous medium)? Is it possible to establish general relationships between the structure of a material and its catalytic properties? How does the reaction itself affect the surface of the catalyst? COSAS proposes a novel approach integrating surface science and electrochemical experiments.

With part of the funding received, an experimental system will be installed that will allow the study of the interaction between the electrode and the electrolyte with atomic precision and in conditions close to real ones. In addition, and no less important, this grant will allow the consolidation of Dr. Barja’s working group, recruiting two pre-doctoral students and two post-doctoral researchers. Answering these questions will make it possible to specifically design catalysts that are as efficient as possible for the production of green hydrogen.

Sara Barja Martínez is a Ramón y Cajal researcher at the UPV/EHU, working at CFM. She received her PhD in Physics from the Autonomus University of Madrid in 2012, and in 2013 she was awarded a Marie Curie IOF grant to carry out her postdoctoral studies at the Lawrence Berkeley National Laboratory (Berkeley, USA) and the Max Planck Institute for Solid State Research (Stuttgart, Germany), two of the most prestigious research centres in the world. In 2016, he joined the UPV/EHU as an Ikerbasque Fellow, coordinating a new line of research in surface electrochemistry. In 2019 she received the Hipatia Prize for Young Talent in Science (awarded by elEconomista). Since 2019 she has been a Ramón y Cajal researcher at the UPV/EHU and continues to lead and develop her research group at the CFM.