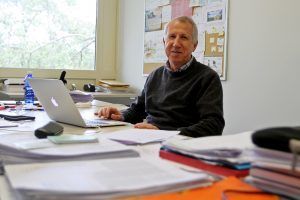 See the press release by UPV/EHU


The Euskadi Research Prize 2018 was awarded to Professor Eugene Chulkov, Professor in the Department of Materials Physics at the UPV/EHU (2003), and researcher at the Materials Physics Center (CFM) and the Donostia International Physics Center (DIPC). The Court of the twenty-third edition of the Prize, made up of five members of recognised prestige in the field of Science and Technology, has unanimously agreed to award the Euskadi Research Prize 2018 to the physicist of Russian origin living in Euskadi, after having met this morning in Bilbao and deliberated among the ten candidates presented in this edition. As soon as the jury’s decision was known, the Councillor for Education, Cristina Uriarte, communicated it to the prizewinner by means of a telephone conversation. 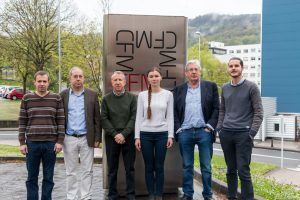 The Department of Education annually announces the Euskadi Research Prize. In even years, as is the case (2018), the prize is announced in the area of Science and Technology, while in odd years it is dedicated to the recognition of the work of professionals in the area of Social Sciences and Humanities. The aim of the Euskadi Research Prize is to encourage scientific activity and to stimulate, promote and value the efforts of qualified researchers and teams from the Autonomous Community of the Basque Country or from outside the Autonomous Community, whose work has had a significant positive influence on Euskadi.

Professor Eugene V. Chulkov (Ryazan region, Russia, 1950), Professor of the Department of Materials Physics at the University of the Basque Country / Euskal Herriko Unibertsitatea (2003), and researcher at the Materials Physics Center (MPC) and the Donostia International Physics Center (DIPC), has made valuable contributions in the field of condensed matter physics, especially in solid state physics and surface physics.Professor Chulkov’s work has given rise to numerous experiments to investigate the decay mechanisms and half-life times of quasi-particle excitations, tunnel spectroscopy and angle resolved photoemission.

Professor Chulkov graduated and obtained his PhD in Physical-Mathematical Sciences at Tomsk State University, Russia, beginning his link with the Basque Country in 1995, after a stay as a visiting professor at UPV/EHU to develop an electron dynamics project on metallic surfaces. The success of the project consolidated Professor Chulkov’s relationship with the University of the Basque Country, to which he was contractually bound from the year 2000, and contributed to the launch of the

Donostia International Physics Center as a pole of attraction for physicists and chemists from all over the world in the field of quasiparticle dynamics, giving rise to close collaborations with numerous experimental and theoretical groups from Europe, the United States and Japan.

Creating a school
In addition to Professor Chulkov’s purely scientific contributions, the jury of this edition values a very important aspect of his way of doing science, which is the creation of a school. In these years, Professor Chulkov has been able to form and bring together an important nucleus of research staff around him, more than fifty leading researchers from all over the world, who are attracted by this school of excellence to the DIPC and Donostia-San Sebastián, turning the city into a pole of attraction for talent of excellence.

Similarly, the jury highlighted Professor Evgueni V. Chulkov’s research and teaching career, and the creation and management of a research group that has become an international benchmark in the theoretical physics of condensed matter. He has also highlighted his research work, which has been reflected in a large number of publications of high level and impact, the delivery of a large number of plenary conferences, as well as his participation as a principal investigator in numerous national and international projects.

The prizewinner has made an extraordinary contribution to the study of the physics of the solid and physical state of surfaces and to the creation of a renowned school of scientific excellence in the Basque Country.