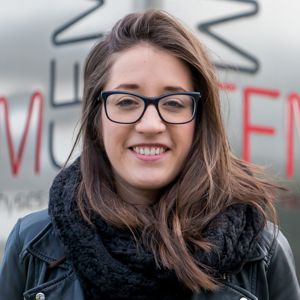 Attention! This defense will be completely telematic

In this thesis, I describe the structural and electronic properties that emerge from the assembly and chemical reactions of organic molecules on metal surfaces. Specifically, I aim to achieve molecular structures where different functionalities are precisely integrated into high electrical conductivity.

Starting point of this work is the choice of prototypical molecular species used in organicelectronics, energy conversion and storage systems. These molecules are enriched by
sulfur (S) and nitrogen (N) groups, which strongly determines the electronic properties, and further funtionalized by (Br) atoms, making them suitable for the formation of polymers
according to the Ullmann reaction scheme. Moreover, S provides a strong and stable molecular anchoring point to the metal surface. Therefore, the specific interaction of Br and S end-groups with the supporting substrate can lead to competitive or hierarchical reaction schemes. The two selected molecules prompted the formation of different structures triggered by the number and location of these Br and S atoms. On the same way, two different substrates have been considered in order to change the interplay between molecule-molecule and molecule-substrate interactions through their symmetry and catalytic properties. Thus, two molecular precursors, with different but similar structures, 4,7-dibromobenzo[c]-1,2,5-thiadiazole (2Br-BTD), and 4’-bromo-4-mercapthobiphenyl (Br-MBP) molecules, have been evaporated on two metallic substrates, namely, Cu(110) and Au(111) surfaces. Morphology and
electronic properties of the assembled structures have been surveyed as a function of annealing temperatures.

The mayor outcomes of this work, achieved by means of a scanning tunneling microscope at the lowest temperature of 1 Kelvin in ultra-high vacuum conditions, are briefly summarized hereafter.

2Br-BTD molecules are formed by a dibrominated benzene ring with a thiadiazole group, which presents a S atom at the apex. The molecular system 2Br-BTD/Cu(110) has allowed identifying the initial mechanistic steps of the molecular debromination preceding the Ullmann cross-coupling reaction. I have monitored at first the paradigmatic oxidative
addition of Cu atoms, which involves the formation of -C-Cu-Br structures, and I have demonstrated that the final detachment of the Br atoms (Cu-Br) is not spontaneous on individual molecules but requires the cooperative action of neighboring moieties. Thus, the metal-organic intermediate reaction step with debrominated molecules linked by Cu adatoms characterizes only self-assembled structures.
By means of spectroscopic and local surface potential measurements, I have shown the delocalization of the molecular resonant state of the 2Br-BTD/Cu(110) self-assembled
metal-organic structure into a continuous conductance channel though the porous
network. This delocalization strictly relates to the correct location of detached Br atoms within the pores and to their important role in the confinement of the Cu surface states. This confinement is fundamental to match the energy of the molecular resonance. The delocalization of the molecular resonant state at 2.1eV, in the visible light energy, should be considered as a good result for applications of solar energy adsorption. Furthermore, the local structural disorder created by the displacement of few Br atoms causes the interruption of the delocalizing channel.
Quite different results have been obtained after the deposition of 2Br-BTD molecules on the
Au(111) surface. On this surface, molecules self-assemble creating different chiral and porous 2-D structures, stabilized by non-covalent intermolecular interactions.
Unlike the adsorption on the Cu surface where Cu adatoms mediate C-C and S-S bonds, in this case, Au adatoms are not directlySpectroscopy at the atomic scale involved in the self-assembled structure, which is thus purely organic. The most interesting result is the formation of intermolecular [S − N]2 secondary bonding interactions between two facing
thiadiazole groups, which, to the best of my knowledge, has not been observed on-surfaces so far.
I have thus demonstrated that [S − N]2 interactions are also important for the stabilization of the self-assembling processes of molecules on the Au(111) surface. With the choice of Br-MBP molecules, formed by two phenyl rings with opposing terminations in Br and SH groups, I aimed to change the chemical interaction with the substrate. Whereas I have deposited the Br-MBP molecules on different substrates, the best results have been obtain on the
Br-MBP/Au(111) system, which is presented in this thesis. The most energetically favorable selfassembled structure, obtained after the deposition at room temperature, is a
dimeric configuration stabilized by S-Auadatom-S interactions. Investigations about the S-Au
bond are very active and attractive, for applications in molecular electronics; hence, our
result sheds some light in the study of this interesting bond.
On this Br-MBP/Au(111) system, the molecular debromination reaction has been achieved
through two different mechanisms, namely, by temperature in the whole supporting area, or, locally, by electrolysis using the tip of the STM as electrode. In this last
case, for the local induced debromination reaction, I have characterized two methods, namely, the electron injection in a specific molecular orbital and the electric field generated between the tip and the sample. By studying the discontinuities in the current traces for different bias ramps, and different tip-sample distances, I conclude that both mechanisms work although at different conditions.
Finally, polymeric structures functionalized by S atoms have been observed upon the postii
annealing of the Br-MBP/Au(111) molecular system at temperatures around 180ºC. Unexpectedly, C-S coupling reaction forms preferentially upon molecular
debromination instead of the C-C crosscoupling according to the Ullmann’s scheme. Long polymeric chains, as well as closed-ring shaped structures, have been obtained depending on the coverage and on the substrate temperature, both
equally formed by diarylthioether structures.