PRESENTATION OF ZIENTZIA AZOKA 2019 BY ELHUYAR 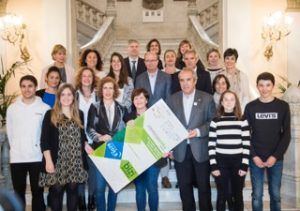 Representatives of the organization, sponsors and collaborators at the presentation of Zientzia Azoka (Bilbao City Council)

CFM collaborates in ZIENTZIA AZOKA 2019,  the Science Fair organized by ELHUYAR in Bilbao: A  meeting of Scientific-Technology projects of young people opened to the public. 90 projects from 30 centres will be presented, with a total of 308 teens and kids involved. 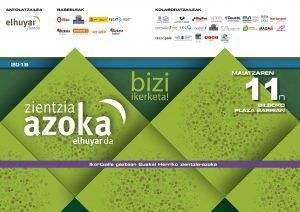 City Council; Amaia Esquisabel Alegria, Director of Research of the Department of Education of the Basque Government; and Leire Cancio Orueta, Director General of Elhuyar have presented the ‘Zientzia Azoka 2019’ in Bilbao City Council .

Young people from the Solokoetxe centre, members of the ‘Bilboko txoriak’ project, winner of the prize that gave access to participation in the Mostra Nacional Portugesa fair, also attended the presentation, exposing their work and telling their experiences. With it we have been able to verify the work carried out by the teachers in the centres and the importance of this type of projects.

Zientzia Azoka has a very complete programme this year. From 12 noon until 9 p.m., young researchers will present technological and research projects in the Plaza Nueva in Bilbao in which they have worked throughout the year answering a question or a challenge. At this year’s fair, there will also be representation of the professional research body from universities and centers, which will be exhibiting their projects in the ‘professional area’.

Members of the SPOON project (Strasbourg, Catalonia, the Netherlands, Croatia and Elhuyar), the European Erasmus+ project, will participate in the fair by visiting the Plaza Nueva to get to know the fair, and to share ideas and training options with professors who participate in the fair. Elhuyar is also a component of the European project STEMFAIRNET, which aims to create a European network of science fairs and enrich the science fairs both in the field of competences and in the field of inclusion, which will document everything that happens at the fair.

PROGRAM AND DISTRIBUTION OF THE FAIR

The official opening will take place at 12:00. The fair has 3 defined areas:

3. Scenario: from 19:00 hours awards ceremony and exhibition of the drawings made during the fair. Dibujatolrato

It is worth mentioning the fact that although the Zientzia Azoka is organised by Elhuyar, it is sponsored by Bilbao City Council and in collaboration with the Science and Technology Network of the Basque Country, so that young people can carry out their work with the support of research staff from Ikerbasque, the UPV/EHU, the Public University of Navarra, Mondragon Unibertsitatea, the University of Deusto, and the Digipen Institute of Technology.

In order to continue with the scientific experiences, several prizes are given after the fair: