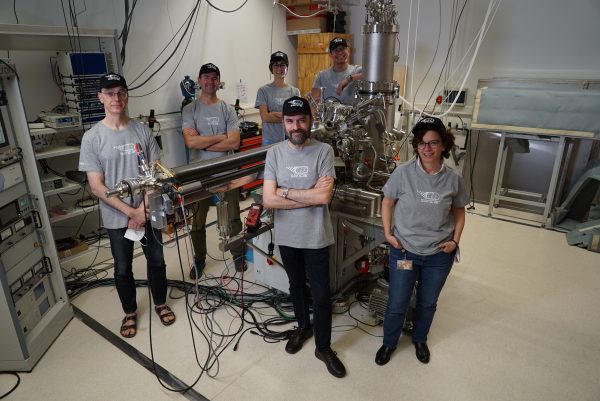 Pilots and part of the team from de SANCAR nanocar

Nanomechanics are already warming up for the international nanocar race, the Nanocar Race II. The Nanocar Race is the world’s smallest car race, in which the vehicles are molecules driven through the tip of a tunneling microscope. The molecules are very small, typically composed of about 100 atoms, and with a dimension of about 3 nanometers. In this scenario, it is easy to understand that driving such a small vehicle is a very complex task.

The championship is not within the reach of just anyone. The researchers use the tip of a tunnelling microscope (STM) to move the nanocars along the track. Touching the molecules with the tip of the microscope is forbidden; the vehicles must move without mechanical thrust from the tip. Their drive mechanism can be either inelastic (related to excitation of vibrational modes or structural changes induced by electric current) or dipolar (resulting from electrical repulsion or attraction between the nanocar and the STM tip). Typically, a nanocochle will travel a few tens of nanometers at a time, so the run occurs on a very small scale. 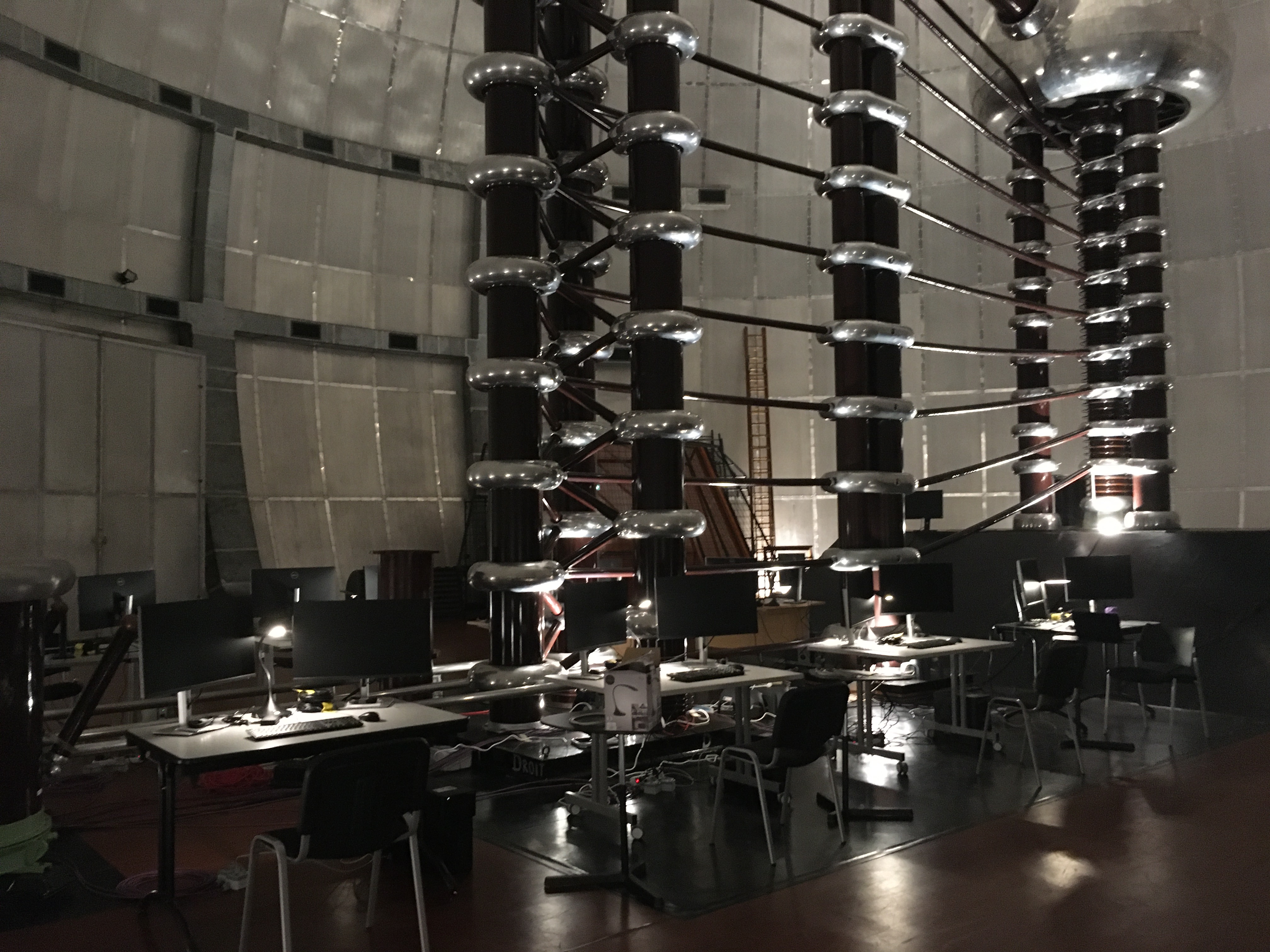 This year the Race Control Center will once again be in Toulouse, at the Boule de Rangueil, a historically emblematic site for the science of the infinitely small.

The winner of the Nanocar Race will be the team that manages to cover the maximum possible distance within 24 hours. All the nanocars will be piloted from a single location, Toulouse, while physically the nanocars will be spread all over the world, located in each of the microscopes of the participating institutions: Instituto Madrileño de Estudios Avanzados en Nanociencia (Madrid), Centro de Física de Materiales (Donostia / San Sebastian), Technische Universität (Dresden, Germany), University of Graz (Austria), University of Strasbourg (France), International Center for Materials Nanoarchitecture (Ibaraki, Japan), Ohio University (USA) and Paul Sabatier University (Toulouse, France). The ultimate goal of this competition is to advance the development and manipulation of nanomachines capable of performing real work, such as carrying molecular weight.

Two Spanish teams will participate in the race, the team from Donostia/San Sebastian and Santiago de Compostela SANCAR, with research staff from CFM/DIPC and CIQUS-USC and NANOHISPA from Madrid, with researchers from IMDEA Nanoscience Institute and Linkoping University (Sweden). It is worth mentioning the strong Spanish presence in this race in which teams from all over the world are participating: USA, Germany, Austria, Japan and France. 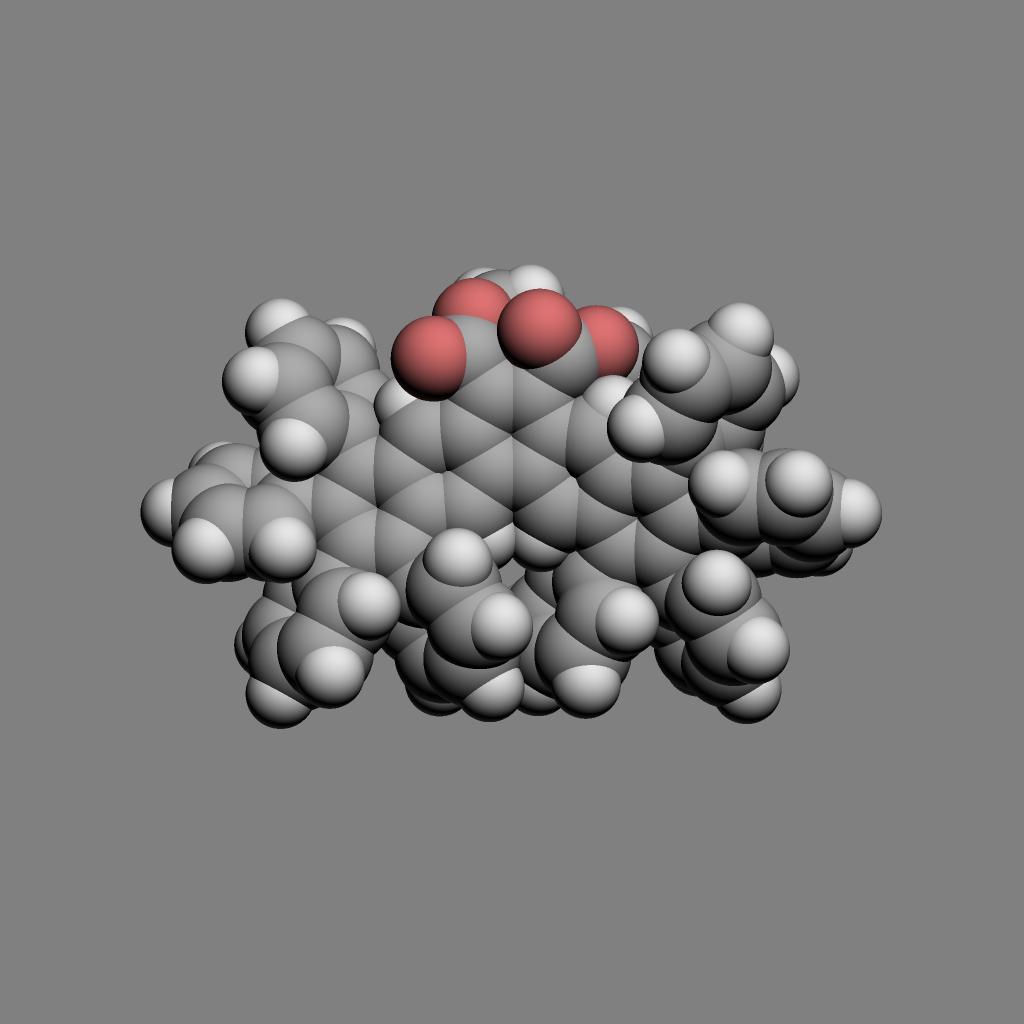 The molecule-vehicle of the SANCAR team.

Although the scale is tiny, the effort to get this nanocar up and running has been colossal. In the style of a formula one team, the fine-tuning of SANCAR has been a long process that has required the collaboration of chemists from the Center for Research in Biological Chemistry and Molecular Materials (CiQUS) of the University of Santiago de Compostela, with researchers from the area of materials physics of the Donostia International Physics Center (DIPC) and the Center for Materials Physics (CFM, a joint UPV/EHU and CSIC).

The design and construction of the molecule has been carried out by Prof. Diego Peña and his team formed by Dr. Jesús Castro, Dr. Dulce Rey and Dr. Manuel Vilas from CiQUS. SANCAR is made up of 128 carbon, hydrogen and oxygen atoms. It has a pentaphene chassis, eight phenyl wheels and two ester groups as propellants. Thus, SANCAR is relatively large, but manageable.

The theoretical design of the system has been carried out by Dr. Nicolás Lorente and Dr. Roberto Robles, both from the DIPC and the CFM. The experimental setup and training has been carried out from the nanophysics laboratory of the CFM and DIPC, with Jan Patrick Calupitan, Dr. Martina Corso, Paula Ángulo, Dr. Tao Wang, Alejandro Berdonces, and Dr. Dimas G. de Oteiza, who is currently developing his research at the CINN in Asturias. Profa. Lucia Vitali, also from the CFM, has provided the STM microscope, where the Sancar race track is located, which the pilots will control remotely from Toulouse.

The Madrid team will be led by the research group led by Prof. David Ecija at IMDEA Nanoscience. Researchers Prof. David Ecija, Dr. Koen Lauwaet, Dr. Ana Sánchez, Dr. Ignacio Urgel and Dr. Ana Barragán will travel to Toulouse to compete in the most exciting 24 hours of the nanocar racing scene. The nanocar is being manufactured by Prof. Emilio M. Pérez’s research group, who have synthesized the SPARC competitor molecule, ensuring that it meets all the requirements to be the fastest: low molecular weight, low interaction with the substrate and with a dipole moment as a propulsion mechanism.

The chemical structure allows the nanocar to move over a surface when approached by the tip of the STM microscope. The NANOHISPA team’s molecule is composed of 70 atoms, with toluene rear wheels and benzene front wheels anchored to the anthracene chassis. This minimalist hydrocarbon nanoarchitecture includes a “motor”: a permanent dipole moment that makes the car susceptible to electric field gradients, and can be used to propel and maneuver the nanoplace. Prof. Rodolfo Miranda, director of IMDEA Nanoscience and pioneer in the introduction of the tunneling microscope in Spain, is confident in the possibilities of the NANOHISPA team: “The team has a great deal of experience in molecular synthesis and manipulation by tunneling microscopy” says Prof. Miranda. The NANOHISPA team is officially sponsored by the Royal Societies of Physics and Chemistry (RSEQ, RSEF) through the Specialized Group in Nanoscience and Molecular Materials (GENAM) and the company Scienta Omicron.

The second international Nanocar Race is organized under the framework of the European project MEMO (MEchanics with MOlecules). The competition will be broadcast live from the CEMES-CNRS campus in Toulouse. Drivers will start engines on March 24, 2022 at 11:00 to compete for 24 hours in the most exciting competition in the nanoworld. All teams will compete at the same time from the same room in Toulouse, controlling their nanocar remotely.

The first Nanocar Race was held in April 2017 and was followed by more than 100,000 people live on the NanoCarRace YouTube channel. In this second edition, more media attention is expected for this event.

8 teams. 24 hours. You can’t miss this incredible edition of the Nanocar Race.