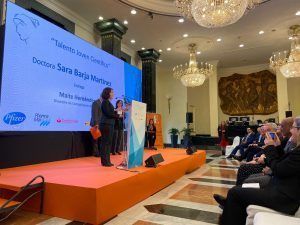 Doctor Barja at the award ceremony

elEconomista held yesterday the first edition of the Hipatia Mujeres en la Ciencia awards, an initiative that aims to recognize those women who have contributed most in the year to the advancement of research or scientific progress in Spain.

Dr. Barja received the award yesterday at the award ceremony.

The winners in this first edition have been two doctors Sara Barja and Elena García, and Clara Piloto, a high executive all of them have a great track record and a bright future that stand out for their commitment to the development of science, social welfare and equality between men and women.

The Hipatia Prize for Young Talent in Science aims to recognise a scientist whose aptitudes and merits to date prefigure a greater projection in research within her field of specialisation. Thus, this award went to Sara Barja Martínez, PhD in Physics, Ramón y Cajal researcher at the CFM.

Barja’s trajectory leaves no doubt about her research excellence. She was awarded the Extraordinary Doctorate Prize for her thesis in the field of condensed matter. Her extraordinary work makes her worthy of a European research grant, International Outgoing Fellowship Marie Curie Action. She continues her postdoctoral studies in prestigious foreign institutions, Lawrence Berkeley National Laboratory (Berkeley, USA) working with two-dimensional materials and has published 26 articles, which have been cited more than 900 times in the journals with the highest impact index. His research has dealt with the atomic scale study of new physical phenomena in 2D 2D materials, one of the centres of interest in physics today.

After receiving the award from the hands of Pfizer’s director of communication, Maite Hernández, Barja thanked the award to the Economist and the initiative that allows “helping the visibility of the scientific quality carried out by women, breaking with current stereotypes and encouraging women who want to devote themselves to these careers”. “I also want to thank the teachers and colleagues who have instilled in me the seriousness and rigor in research as well as the ability to have fun working in teams and my family, which allows me to combine being a person and not just a scientist,” concluded the doctor.

The Hipatia Prize for Scientific Trajectory seeks to award a woman scientist who stands out for her renowned research career and has made a decisive contribution to scientific progress within her area of specialization.

The winner in this category was Elena García Armada, a doctor in robotics from the Polytechnic University of Madrid. García, a senior scientist at the Centre for Automation and Robotics, has focused her career on developing and manufacturing devices aimed at contributing to rehabilitation and increasing the mobility of children suffering from degenerative neuromuscular diseases. Her studies have played a key role in the development of devices that allow small children suffering from neurological diseases to walk. An example of this is that her Atlas exoskeleton is already being used for the rehabilitation of children in several hospitals. In addition, she is the founder of Marsi Bionics, a company derived from the CSIC and the UPN, whose objective is the research and creation of pediatric exoskeletons.

After receiving the award from the Secretary of State at the ceremony held in Madrid, Dr. Garcia said she was “proud to receive this award for my professional career and more from the hands of Angeles Heras, who teaches us that science is not at odds with being a plain person. In this line, has had a word of thanks to the Economist for giving “the opportunity to make female talent visible and share and attract more, because it always adds.

“We have a pioneering technology and I thank everyone for their collaboration and I take this opportunity to ask for more help from companies because we have a project underway to provide therapy to these children who need to use technology to improve their mobility,” he said before leaving the podium.

Last but not least, the Enterprise and Science Award has been won by Clara Piloto for her work as director of Global Programs at MIT Professional Education. Piloto is an expert in business development and professional education programs with more than 20 years of experience.

Her achievements in favor of including women in MIT Professional Education programs make her a global expert in devising strategies for organizations. The newspaper wanted to reward her great effort to make professional education a place where Spanish-speaking women can find a path to professional growth and continue their education.

“I would like to thank the Economist for this recognition and that he celebrates.