We study the coupling between the orbital and spin angular momentum (AM) components, i.e., the spin-orbit coupling (SOC), in two different branches of Physics, spintronics and nanophotonics. In the field of spintronics, we study electronic transport in diffusive conductors, in which the SOC is the microscopic origin of the so-called magnetoelectric effects, i.e., interconversions between charge and spin currents and densities. In particular, we offer a complete theoretical framework to describe hybrid spintronics devices combining regions with and without SOC.

In nanophotonics, we focus on the fundamental study of the SOC in light and its effects at the nanoscale, analyzing the single scattering problem of a plane-wave impinging in an electric and magnetic dipolar dielectric sphere. The conservation of the incident total AM after scattering leads to its redistribution into its spin and orbital AM components depending on the scattering angle. 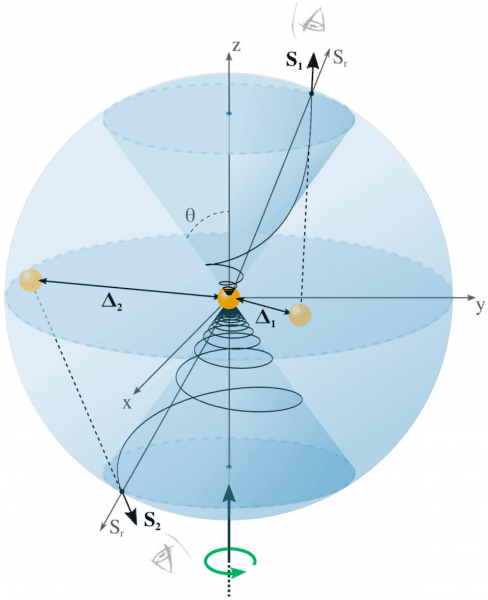 Schematic representation of the spin-orbit optical mirage arising in both electron and light plane wave scattering. The optical mirage originates from the spiraling Structure of the energy flux after scattering, which leads to an apparent displacement of the radiating particle at far-field, where the paraxial approximation can be assumed.