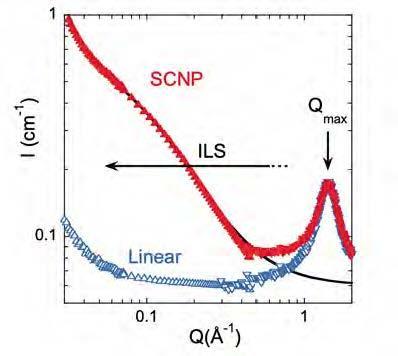 Fig. 1. Differential cross section of the bulk sample consisting of linear precursor chains (blue) and of SCNPs (red symbols) obtained by SANS. The vertical arrow shows the position of the inter-chain peak Qmax.

Single-Chain Nano-Particles (SCNPs) are soft nano-objects halfway between linear chains and `standard’ nano-particles. Studies of systems based on SCNPs allows to look on the still scarcely explored interface between the soft matter fields of polymers and colloids. Here Arbe et al. have addressed the fundamental question of the impact of purely intra-molecular cross-linking on the properties of a polymer melt.

Single-Chain Nano-Particles (SCNPs) are obtained by intra-molecular cross-linking of individual macromolecular chains. The unique properties of a melt exclusively composed by SCNPs have been here addressed by a concerted effort, combining advanced chemistry and a battery of different experimental tools, including `macroscopic’ (calorimetry, dielectric and mechanical spectroscopy) and `microscopic’ (neutron diffraction and neutron spin echo, NSE) techniques.

Neutron scattering techniques, providing spatial resolution through the scattering vector (Q) dependence of the measured magnitudes, have been applied to perdeuterated systems, to follow collective features. The comparison with a bulk sample composed by the long linear counterpart chains (precursor macromolecules without internal crosslinks) demonstrates that the structure and dynamics at local length scales including the inter-chain distances (in particular, the structural relaxation) are hardly sensitive to intra-molecular cross-links (see Figs. 1 and 2). The authors were also able to extend their neutron experiments to the so far almost virgin territory of the so-called intermediate length scales (ILS). 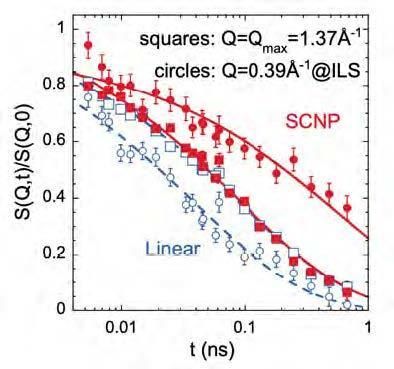 Fig. 2. Normalized dynamic structure factor measured by NSE at Qmax (probing the -process) and a representative Q-value in the ILS region. Lines are fits to stretched exponential functions.

The ILS region corresponds to length scales larger than the typical inter-molecular (for small molecules) or inter-chain (for polymeric objects) distances but not yet in the hydrodynamic regime. At ILS, a pronounced slowdown of the collective dynamics is observed (Fig. 2), associated to emerging structural heterogeneities with a characteristic length of about 1 nm (Fig. 1). On the other hand, the dielectric relaxation spectra reveal an enhanced intensity in the frequency region below the a-process loss peak –signature of an additional mechanism for relaxation–, and rheological experiments show a strong impact on the rubbery plateau properties.

This combined study allowed the authors to propose a new picture. Local globulation and compartmentalization into domains composed by internal loops induced by the intra-molecular cross-links has three main impacts: (i) introducing heterogeneities with nanometer length scale; (ii) increasing the complexity of the dynamics; in particular, a new relevant relaxation mechanism appears, presumably associated to the internal domains; and (iii) strongly modifying the entanglement network of the macromolecules.