The instrument suite of the European Spallation Source (ESS)

The use of the neutron as an exquisite probe of the structure and dynamics of condensed matter is not only well established but it also continues to evolve in exciting directions, particularly in our continent. Currently under construction in Lund (Sweden), the European Spallation Source (ESS) seeks to offer order-of-magnitude gains in scientific capabilities relative to the state-of-the-art.

The instrument suite described in this work represents the culmination of continued efforts across a wide range of disciplines and institutions over the past decade. The ESS is an accelerator-based, pulsed-neutron source optimized to provide high flux, flexible resolution, and broad bandwidth, capabilities that translate into a plethora of new scientific opportunities. A total of fifteen instruments have been designed to this end, with a view to their imminent construction and subsequent deployment: two small-angle scattering instruments and two reflectometers; an imaging station; five diffractometers for the study of single crystals, macromolecular systems, magnetism, and engineering; and five inelastic neutron spectrometers spanning a wide range of length- and time scales simultaneously – one of the primary merits and strengths of neutron-scattering techniques, as illustrated in the accompanying figure. The team at the Materials Physics Center has been particularly focused on the VESPA spectrometer, including its science case and specification. This task has benefitted greatly from recent and joint developments at other neutron sources worldwide, most notably on TOSCA at the ISIS Pulsed Neutron & Muon Source in the United Kingdom. Both VESPA and TOSCA are high-resolution broadband spectrometers ideally suited to explore the properties of new materials, from fuel stores and nanostructured media to supramolecular frameworks for carbon-dioxide capture. On VESPA, the variable spectral resolution coupled to simultaneous diffraction also paves the way for parametric and kinetic studies that would offer an unprecedented level of detail and insight, currently beyond our reach. 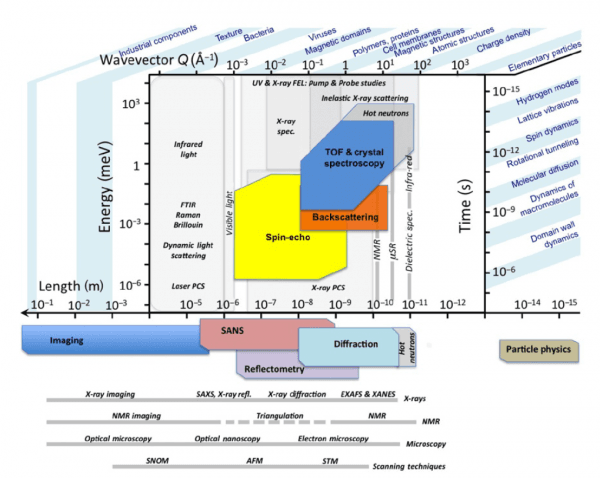 Figure: Length and time scales accessible to neutrons, along with a qualitative comparison with other experimental probes. Adapted from Fernandez-Alonso F and Price DL, Neutron Scattering – Fundamentals (Academic Press, 2013).