Ultrafast laser pulses in the ultraviolet, visible, and near-infrared are extremely efficient in promoting a variety of surface adsorbate dynamical processes, including diffusion, desorption, and reactions. Irradiation of a metal surface with large laser fluences (~1mJ/cm2) generates a transient nonequilibrium distribution of hot electrons, which rapidly thermalize into a Fermi-Dirac distribution with an electron temperature of several thousand Kelvin that largely exceeds the lattice temperature. Subsequently, the photon-excited electronic system can transfer energy directly to the adsorbate, but also indirectly via the vibrationally excited surface lattice that results from electron-phonon coupling.

Two-pulse correlation (TPC) experiments are usually employed to establish the timescale of the adsorbate-substrate energy transfer and, accordingly, determine whether the adsorbate reaction is electron or phonon mediated. Most systems investigated so far are characterized by time responses of a few picoseconds or less that are ascribed to a dominant electron-assisted process [5–9]. Only the desorption of CO from Ru (0001), with a TPC time response of ∼20 ps, is considered to be phonon dominated. Thus, it is fair to conclude that the role of the electron-excited phonons has generally been overlooked; due in part to the lack of a theoretical model advanced enough to incorporate all the ingredients in this complex scenario.

In this letter, the authors propose a novel ab initio classical dynamics scheme that incorporates effects due to the photon-excited electronic and phononic systems, as well as out-of-phase coadsorbate dynamics. Using this complete dynamics, it is now possible to demonstrate that both electrons and phonons are critical to understanding the ultrafast desorption dynamics of CO from Pd (111). By performing different types of simulations in which electrons and phonons are alternatively switched on and off, the authors are able to disentangle the contribution of the heated electronic and phononic systems in the desorption dynamics. Specifically, hot electrons efficiently couple energy into CO translational degrees of freedom while hot phonons reduce the CO-Pd bond strength by destabilizing the adsorbed CO from its equilibrium positions. The latter can be inferred by comparing the time evolution of the CO displacements obtained when the excited phonons are or not included in the simulations (middle panels in the figure). As a result, the hot electrons are more efficient in desorbing the phonon-induced unstable CO molecules. The CO trajectories sketched in the top panels when only hot electrons (left panel, Te-AIMDEF) and both electrons and phonons (right panel, (Te,Tph)-AIMDEF) contribute are good examples of how the excited phonons affect the CO dynamics at 0.75 ML.

Altogether, this theoretical study provides a renewed perspective on the importance of phonons in promoting the electron-mediated femtochemistry of adsorbates at metals. 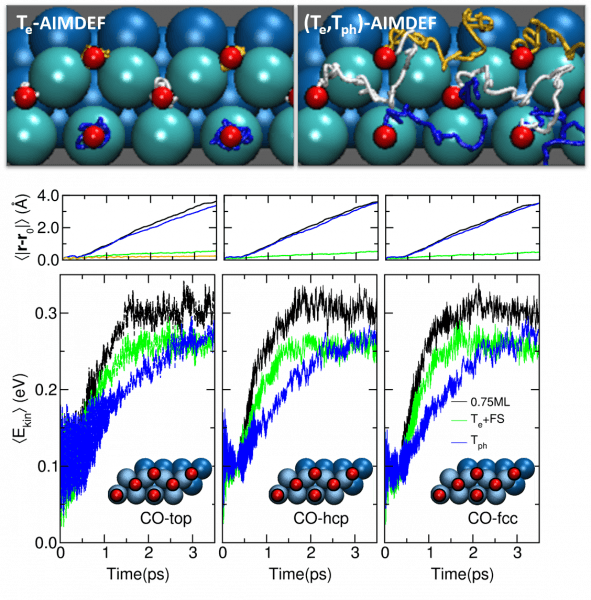