Molecules are perceived as the ultimate compound for future electronic and optoelectronic devices of extremely low dimension. In such a molecular circuit, each molecule can hold specific functionalities such as carrying electronic current, emitting photons, or switching on and off a signal. By developing an ultra-resolved nanoscopy technique, researchers have managed to trace and dissect the origin of light emitted from a switching molecule, directly associated to the fast motion of a pair of hydrogen atoms forth and back within the single molecule. Such an access to molecular dynamics with light works as a sophisticated molecular nanostrobe which can open a new way to  engineer fast optical communications in organic circuitry.

Single-molecule devices have attracted a tremendous interest fuelled by the objective of transforming a fundamental research topic into a new and powerful technology. Due to their intrinsic quantum nature, molecules open up functionalities that go beyond today’s electronics. Among these perspectives, the concept of single molecule optoelectronics, which  consists in combining optical and electronic properties within a single molecule, is only emerging. In a wish list of molecular optoelectronics, it is envisioned that light could be used to convey information at high frequency between well-separated components (atoms) within a single-molecule. Now, this objective to access the molecular internal structure and its  dynamics is closer, thanks to the achievement by researchers at IPCMS of Strasbourg. These researchers have implemented a nanoscopic technique which allows to distinguish the exact origin of a molecular flash inside the molecule at the atomic scale. Using this method to probe a prototypical molecular optoelectronic component, they observed an unexpected blinking of the emitted light. Together with the theoretician colleagues from the Center for Materials Physics (CSIC-UPV/EHU) in  San Sebastian, they could associate the flash fluctuation to the switching of hydrogen atoms between two positions of the molecule, occurring about 1000 times per second, in a mechanism known as tautomerization. This result provides new information on this reaction, and shows that a molecule may be used as an intermittent emitter, or molecular nanostrobe, potentially controllable, and relevant for optical communications at the nano-scale.

The researchers used the sharp metallic tip of a scanning tunneling microscope as an optical nanoantenna capable, simultaneously, of confining light to sub-molecular volumes and to excite a single-molecule with electrons. Located on top of a free-base phthalocyanine, a prototypical single-molecule switch, this nanoantenna was capable of amplifying the intensity of the molecular flashes by several orders of magnitude. By moving the antenna with respect to the molecule, the researchers achieved an map of the flash emission with unprecedented atomic resolution. More importantly, they not only identified the origin of the flash but related its blinking  to the motion of the hydrogen atoms within the molecule.

The next step for the researchers will be to find a method to manipulate the “on” and “off” state of this molecular strobe to use it as a controllable molecular–scale light emitting switch, thus turning the dream of molecular optoelectronics into a closer reality. This work is published in Nature Nanotechnology. 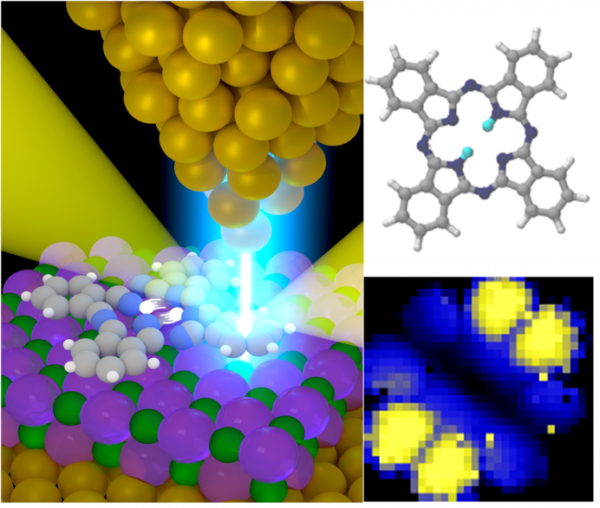 Left: Artistic view of the amplified fluorescence of a molecule induced by a nanoantenna tip. The two central hydrogen atoms are switching positions, and producing specific light flashes. Right, Top: Structure of the phthalocyanine molecule under study. Bottom: Light-emission map with submolecular resolution, allowing for identification of the origin of the flashes within the molecule.