Water is an extremely complex liquid, made of networks of H2O molecules linked by hydrogen bonds that continuously form and break. Most of our knowledge of the liquid comes from spectroscopic studies—dielectric relaxation, Raman scattering, infrared absorption, and x-ray or neutron scattering—which use radiation or particles to probe different aspects of atomic and molecular motions. The combined information derived from all these techniques may provide a coherent picture of the liquid’s dynamics, shedding light on important questions about the nature of water. How do molecular phenomena, such as vibrations, rotations, diffusion, and the making and breaking of hydrogen bonds determine the macroscopic properties of water, including its large dielectric constant? What are the mechanisms by which the liquid relaxes when energy is deposited into it? What is the distance over which molecules of water can “feel” each other —the so-called correlation length?

Now, the authors of this work combine results from measurements of dielectric relaxation and neutron scattering to deliver a detailed and unified picture of water dynamics at room temperature. Through dielectric relaxation experiments, the collective relaxation of electrical dipoles that determines the macroscopic dielectric response of water is characterized. Thanks to the atomic scale sensitivity of neutron scattering measurements, the authors were then able to establish a relationship between molecular dynamics and the dielectric behavior of the liquid.

The main feature of dielectric relaxation measurements is a peak in e”(n) centered at 20 GHz (see Figure). This is the well-known Debye peak, indicating that the collective relaxation of the macroscopic dipole moment occurs on a time scale of 8.3 ps. By means of neutron scattering, the authors of this paper have shown that the same peak is seen when the (incoherent) neutron scattering susceptibility is measured at a momentum transfer of Q = 7 nm-1. The Q dependence of the peak position demonstrates that dipolar relaxation is linked to molecular diffusion and gives the length scale of collective dipolar relaxation. The researchers deduce that the 8.3-ps dynamics is due to the movement of atoms along relatively large distances (0.34 nm), which are comparable to or slightly larger than intermolecular distances.

As in the case of dielectric relaxation, the authors’ neutron scattering experiments also reveal two smaller peaks in the THz domain, a high-frequency range hardly accessible by dielectric relaxation. Because their position doesn’t change with Q, the peaks correspond to localized motions. The peak at the highest frequency (around 2 THz) is associated with bending of chains of three oxygen molecules connected by hydrogen bonds (O—O—O). The other one, at intermediate frequencies (around 0.15 THz), is a novel finding of this work. This peak is related to local processes—motions of hydrogen atoms that take place when intermolecular bonds break and reform on picosecond time scales.

These results confirm the presence of two relaxational processes in liquid water, which are related to the diffusion of molecules and local movements associated with the making and breaking of hydrogen bonds, respectively.

As the authors pointed out, this picture is similar to that observed in polymers,

which involves two main types of relaxation —called a (diffusion-like) and b (localized motions)— taking place on different spatial and temporal scales. This description also opens a new way of approaching dynamics of water under different conditions (supercooled, confined, biological water, etc.) and that of other H-bonded liquids. 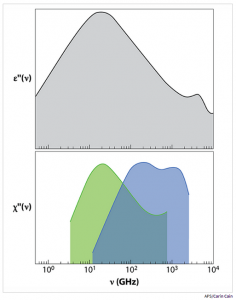 Figure: (Top) Dielectric relaxation measurements of water at 298 K reveal a 20-GHz peak in the imaginary part of the dielectric constant and hints of further peaks at higher frequencies. (Bottom) Neutron scattering data at Q= 7 nm-1(green) indicate the 20-GHz peak is due to molecular diffusion. Data at Q= 20 nm-1 (blue) reveal two high-frequency peaks at 0.15 and 2 THz and suggest they originate from local motions of hydrogen and oxygen atoms.