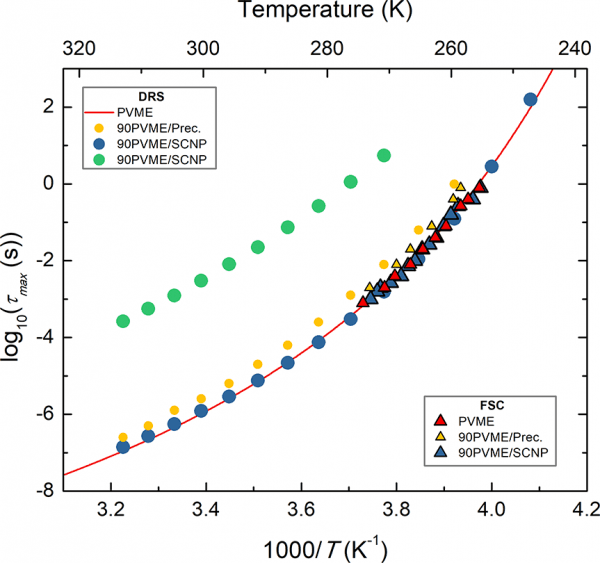 Robles-Hernandez et al. investigate the glassy dynamics of an all-polymer nanocomposite, made of a linear polymer, poly(vinyl methyl ether (PVME)), with dispersed single-chain nanoparticles (SCNPs) based on polystyrene (PS), by combining broadband dielectric spectroscopy (BDS) and fast scanning calorimetry (FSC). These results highlight the hybrid nature of this kind of materials, intermediate in between that of a conventional polymer nanocomposite and that of a miscible polymer blend.

Formulation of polymeric composites is a very useful approach to tune material properties starting from already existing materials. Usual polymer nanocomposites contain inorganic fillers with a tendency to segregate. A new alternative is obtaining all-polymer nanocomposites by mixing conventional linear polymer chains with SCNPs generated by intramolecular collapse of single linear chains of a different polymer. In these systems, the SCNPs can be deformed/penetrated affecting the dynamics and thermodynamics of the matrix. A question that remains to be answered in particular, is how the molecular dynamics and the equilibrium recovery in this new kind of nanocomposite compares with that observed in more conventional nanocomposites prepared using inorganic hard nanofillers.

In this work, the authors have addressed this question by investigating the glassy dynamics around the glass transition of a mixture of the linear PVME with 10% wt PS-based SCNPs. By BDS, they characterize the molecular motions of PVME segments in the system with negligible contributions from the SCNPs. By FSC, which is sensitive to both components of the mixture, accessing both the time scale of the molecular motions responsible for the glass-transition phenomenon, the so-called α-relaxation, and the kinetics of equilibrium recovery of the system during physical aging. 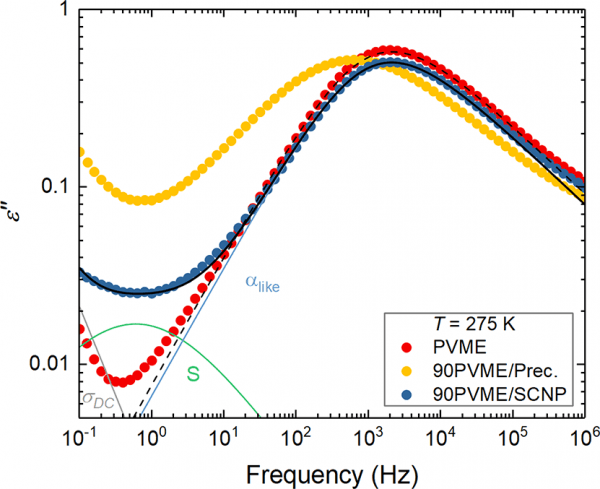 Figure 2. Dielectric losses of PVME (red), 90PVME/Prec (yellow), and 90PVME/SCNP (blue). The dashed line is the fitting curve corresponding to the α-relaxation of pure PVME. The solid black line is the fitting curve obtained by the addition of α-relaxation (blue), an additional slow mode (green), and DC contribution (gray) in the 90PVME/SCNP sample.

The results obtained for the mixture PVME/SCNPs are also compared with those corresponding to an equivalent mixture of PVME with the linear polymer precursor (Prec) of the SCNPs. This set of data allowed identifying the major peculiarities of this all-polymer nanocomposite as compared to more conventional nanocomposites.

The major results are summarized as follows: i) the segmental dynamics of the matrix is not much influenced by the presence of SCNPs (Figure 1). ii) However, BDS makes evident the presence of a slow component of the segmental dynamics of the mixture that would be related with the PVME in intimate contact with the SCNPs (Figure 2). iii) The final equilibrium recovery of the all-polymer nanocomposite involves extremely large time scales (a factor of 100) as compared with the equivalent blend of linear chains. iv).

The present results suggest that the nanocomposite picture can be depicted as approximately consisting of 87% pure PVME matrix with inclusions of PVME penetrated PS-SCNPs  (25/75 wt%).