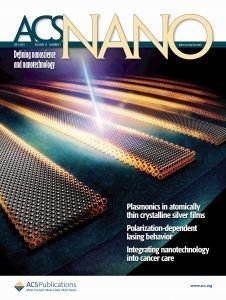 An international team of researchers demonstrates the existence of narrow plasmons in the near-infrared regime by using atomically-thin silver films of crystalline quality.

Even though we might not be aware of it, plasmons in noble metals, such as silver and gold, have been used to color glass since ancient times. In recent years, plasmonics has made its way through to become a key component in the field of optical devices essential in the miniaturization of optoelectronic devices to the nanoscale.

It is known that plasmonic interactions between electrons and photons change significantly in materials when one or more of the dimensions of the metallic object are reduced down to the nanometer scale. The advent of graphene and other two-dimensional crystals has helped display appealing properties of plasmons such as a large electrical tunability. However, the plasmons generated in these materials are too broad or exist at too low frequencies, in a range that is well below the expected near-infrared regime needed for most optical devices.

In a recent study published in ACS Nano and selected to appear as the cover image of the July journal issue, reasearchers from ICFO-Institut de Ciencies Fotoniques, DIPC and CFM led by Enrique Ortega and Javier García de Abajo, in collaboration with Yale University and Bar Ilan University, report on the fabrication and the excellent plasmonic and electronic properties of wafer scale atomically thin crystalline silver films composed of only a few atomic layers. 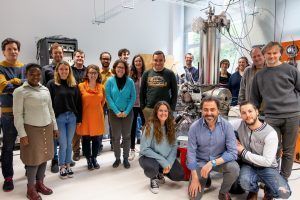 The Nanophysics Lab at CFM, lead by Professor Enrique Ortega.

Through a two-step process of fabrication and under ultrahigh-vacuum conditions, the team of researchers was able grow high-quality flat silver Ag(111) films on silicon Si(111) wafers, with a thickness as small as ~1.5nm (equivalent to seven atomic monolayers). The film quality was high enough to resolve quantum electronic states through angle-resolved photoemission. To excite and probe plasmons in this films, they first carved nanoribbon arrays, and then shinned near-infrared light. Narrow plasmons with high quality factor (~4) were observed as spectral features in the reflected and transmitted light.

The results of this study prove that atom-thin crystalline silver films are capable of supporting high-quality narrow plasmons in the near infrared, below ~2 micron wavelength. In addition, this study has proven that such material could be the perfect alternative to highly-doped graphene, which, despite its amazing properties, has only reached the mid-infrared (wavelengths above ~5 microns), far from the technologically attractive near-infrared region.