Reaching the ideal glass in polymer spheres: Thermodynamics and vibrational density of states

Glasses, though in the solid state, differ from crystals as they exhibit no long-range order in the atomic distribution. In general, a liquid of any kind can be cooled down below its melting temperature, provided that large cooling rates are used to avoid crystallization. Further cooling leads to the formation of a glass – at a temperature addressed as glass transition temperature, Tg – whose thermodynamic state profoundly depends on its thermal history. Once in the glassy state, spontaneous evolution towards low energy states, known as physical aging, takes place.

A deep unresolved question in glass science regards the equality of the glass entropy with that of the crystal at a finite temperature, addressed as the Kauzmann temperature, TK, implying an entropy catastrophe with the paradoxical scenario of a liquid having smaller entropy than that of the crystal at T < TK. To avoid this unpalatable scenario, it has been largely debated whether a true second order thermodynamic transition, the “ideal” glass transition, at TK takes place. An important aspect related is that, apart from the thermodynamic view, the achievement of low energy glasses may deeply affect the glass Vibrational Density Of State (VDOS). An excess in the VDOS, addressed as the boson peak, is observed in glasses whose magnitude decreases with the energy.

Accessing low energies in bulk glasses is unfeasible due to the astronomical time scales required. Indeed, the transformation of the supercooled liquid into a glass takes place at large energies and subsequent glass equilibration below Tg is extremely slow. Hence, the authors exploited the ability of glasses with large free interfaces to access low energy states. Specifically, aggregates of spheres of a polymeric glass former were aged well below their Tg and characterized by calorimetry and inelastic neutron scattering to monitor the thermodynamic state and the VDOS, respectively.

The results show that, when aged at appropriate temperatures, glassy spheres attain a thermodynamic state corresponding to an ideal glass in about one day; indicating that increasing glasses’ free interface induces a tremendous reduction of the timescale to recover equilibrium. Via a relaxation process with finite timescale deep in the glassy state, this acceleration allows attaining glass energies relevant to detect a kink in the enthalpy, identified with the transformation from the standard into the ideal glass (see Figure, upper right panel). In the ideal glassy state, the boson peak disappears (see Figure, lower right panel), thus rendering the VDOS alike that of crystals. 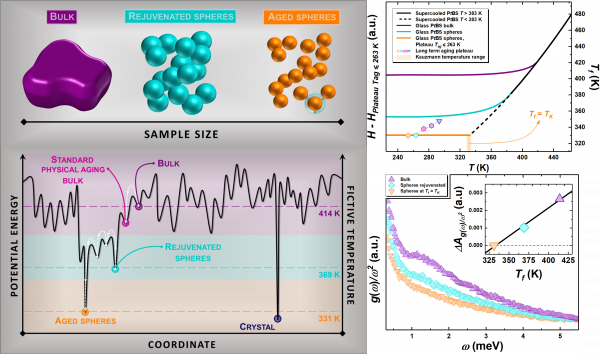 Figure: (Left panel) Schematic representation of the potential energy landscape for bulk and sphere glasses, showing how deep in the landscape the latter system can fall. (Right upper panel) Thermodynamic plot showing the glass enthalpy of bulk and polymer spheres, the equilibrium (supercooled) line and the kink in the enthalpy at the ideal glass transformation. (Right lower panel) Reduced VDOS for bulk and polymer spheres before aging (rejuvenated) and in the ideal glass state. The inset shows the relation between the glass thermodynamic state and the VDOS.