Self-propelling microparticles are often proposed as synthetic models for biological microswimmers with internal feedback. Here, this research team presents an experimental realization of reconfigurable active colloids. In particular, Alvárez et al connect the propulsion of the active colloidal clusters to their temperature-dependent size and dielectric properties, mediated by the presence of soft, thermo-responsive microgels, which the authors extensively characterize.

The ubiquity and success of motile bacteria are strongly coupled to their ability to autonomously adapt to different environments. Realizing artificial microswimmers with similar adaptation capabilities might substantially impact technologies ranging from optimal transport to sensing and microrobotics. Existing approaches at the colloidal scale mostly rely on external feedback. On the contrary, endowing artificial microswimmers with an internal feedback mechanism remains an elusive task.

A promising route to achieve this goal is to exploit the coupling between particle shape and motility. Here, an approach to fabricate reconfigurable microswimmers is presented, relying on a simple combination of standard “hard” particles and soft responsive colloids using asymmetric colloidal clusters (dumbbells) containing both PolyStyrene (PS) microparticles and soft thermo-responsive microgels. The PS particles convert an external light intensity signal into heat, causing the transition of the attached microgel from a swollen to a collapsed state, which can be reversed by reducing the illumination. When the microgel reconfiguration is coupled to self-propulsion, the result is a reconfigurable microswimmer with internal feedback triggered by the sensing of a light stimulus orthogonal to its propulsion scheme.

Upon applying an AC voltage at a frequency f = 1 kHz to an aqueous suspension, the dumbbells self-propel with velocities around 3-6 μm s−1. We tracked the motion of the dumbbell particles under epifluorescence illumination encoding the input signal for particle reconfiguration. A systematic quantification shows that the velocity changes caused by illumination are fully reversible with response times of a few seconds. To rationalize the results, the team evaluated the Clausius–Mossotti factor connecting the velocities with the solvent viscosity, the particle radius, and dielectric properties. For doing so, they used dielectric spectroscopy to extract the permittivity 𝜖′p and conductivity 𝜎′p of a single microgel (see Figure 1) from the direct measurements of the corresponding effective values of a microgel suspension as a function of frequency and temperature.

The obtained results (see Figure 2) demonstrate that programmable adaptive behavior can be implemented by exploiting soft responsive colloids as components of artificial microswimmers. The selection of microgels with given properties (e.g., size, swelling ratio, and dielectric properties) will render active clusters which spontaneously respond to temperature changes in a programmed fashion. 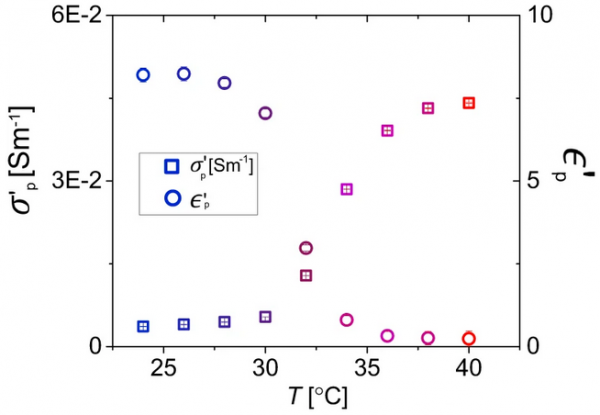 Figure 1: Permittivity (𝜖′p, open circles) and conductivity (𝜎′p, open squares) vs. T at f = 1 kHz obtained from the dielectric measurements of a microgel suspension as a function of frequency and temperature. 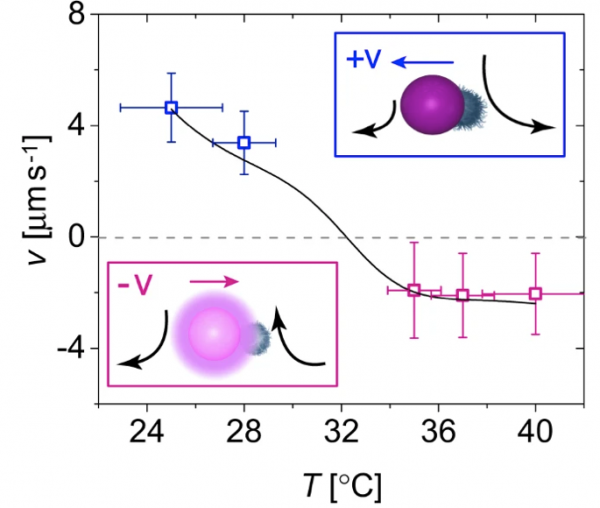