Semiconductor Quantum Dots (QDs) feature high two-photon absorption capability, enabling applications in biosensing and nonlinear optoelectronics. Plasmonic nanoparticles may enhance the electromagnetic field on the nanoscale, which increases the applicability of QDs. Here, the researchers directly measured the enhancement of two-photon absorption in QDs near the plasmonic nanoparticles.

Semiconductor Quantum Dots (QDs) are known for their highly efficient two-photon absorption compared to the conventional organic fluorophores. Due to the very high values of Two-Photon Absorption Cross-Sections (TPACSs), QDs are widely used for two-photon fluorescent bioimaging, where they ensure a uniquely high contrast, as well as for the fabrication of nonlinear optoelectronic devices operating in the up-conversion mode. However, due to the nonlinear nature of the two-photon absorption process, efficient two-photon excitation of photoluminescence of QDs requires very high laser intensities, which limits their applications. There are two possible ways to increase the two-photon excitation of photoluminescence of QDs: by increasing their photoluminescence Quantum Yield (QY) or by further increasing the TPACS. Plasmonic nanoparticles may act as open nanocavities for increasing the QY via the Purcell effect, but this enhancement is strictly limited by the maximum possible QY value of 100%.

In this work, the authors directly investigated the effect of plasmonic nanoparticles on the effective TPACS of excitons in QDs. They have found that effective TPACS of excitons in a QD–PMMA thin film can be increased by a factor of up to 12 near the linearly excited gold nanorods. Using gold nanospheres, in which plasmons cannot be excited in the infrared range, as a control system, the researchers have shown that, although both gold nanospheres and gold nanorods increase the recombination rate of excitons, the TPACS is increased only in the case of gold nanorods. They believe that the observed effect of TPACS enhancement is a result of the nonlinear two-quantum energy transfer from the plasmons in gold nanorods to excitons in QDs, which they have supported by numerical simulations. Thus, Krivenkov et al. have developed an approach for directly increasing the effective TPACS of the excitons in QDs by inducing a nonlinear near-field interaction between absorptive exciton transitions in QDs and plasmon modes in plasmonic nanoparticles. The results of this study are expected to expand the applications of two-photon excitation of plasmon–exciton hybrid structures in multiphoton sensing and bioimaging, photodynamic therapy, and fabrication of nonlinear optical photodetectors. 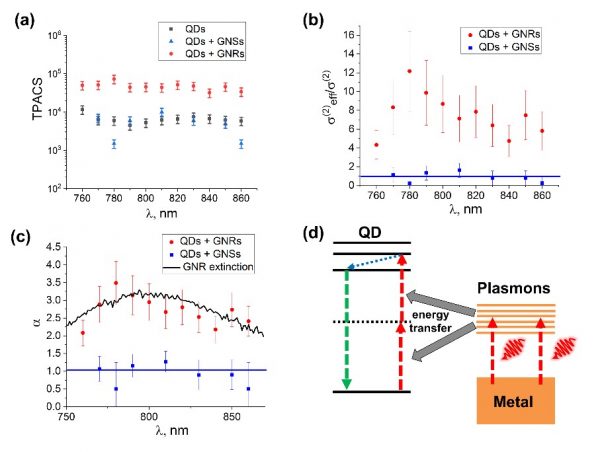