ELECTRONS CAN BE MOVED THROUGH A NANOSCOPIC CAVITY BECAUSE OF THE OSCILLATION CONTAINED IN AN ULTRA-SHORT LASER LIGHT PULSE. 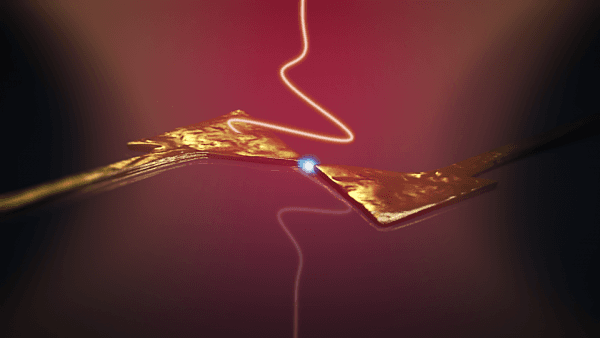 An international scientific team involving CFM researchers has succeeded in using laser light to control the movement of electrons in a metal circuit. This achievement, by manipulating a circuit at ultra-fast optical frequencies, has great potential to accelerate data processing speed and could, therefore, contribute to transforming the computing paradigm of the future. The results of the study, published in the journal Nature Physics, have various applications in nanotechnology, especially in the field of optoelectronics.

The technological achievements in electronics have been absolutely impressive over the course of the last decades with a major impact on the society that has drastically evolved towards the digital age. “The fundamental principle behind the current digital revolution is quite simple: the ability to open and close an electrical circuit as quickly as possible in order to perform an operation on a sequence of bits”, explains Javier Aizpurua, CSIC researcher at CFM and co-author of the study. “In fact, modern transistors can operate at frequencies below 1 GHz, which corresponds to a billion operations per second. However, the most common platform to achieve this result is based on semiconductors, such as silicon, which have reached their optimum performance, and already present objective difficulties in improving the speed required by electronic components”, he adds.

To solve this technological bottleneck, this new study has used laser light to manipulate the electrons in an ultra-fast way. “Light has the advantage of oscillating at frequencies several million times faster than those achieved in purely electronic circuits. Therefore, controlling a circuit at such (ultrafast) optical frequencies has enormous potential to change the speed of data processing,” he adds.

Although the achievement of this objective is still far away, the experiments and theoretical development carried out by the international team of researchers show that it is possible to use the oscillation of the electric field contained in a pulse of ultra-short laser light to move electrons through a nanoscopic cavity on femtosecond (10-15 s) time scales, creating an otherwise open circuit. “In this work, we have managed to identify the movement of the electrons during those ultra-fast times induced by the laser pulse that controls them,” says Aizpurua.”The results of this work have had a fundamental impact on the understanding of how light interacts with matter, especially in a regime of interaction in which it is possible to observe quantum phenomena that occur on scales of space and time that were previously inaccessible,” the scientist adds.

The impact of these results also affects a wide range of applications in nanotechnology, particularly in optoelectronics, and is a reflection of the ability to manufacture nanodevices formed by highly precise nanostructures capable of manipulating electrons, as well as the development of innovative laser light sources.

“Finally, the level of conceptual compression and monitoring of the movement of the electrons (their dynamics) within the nanodevice will serve to design and implement more complex non-linear operations in optoelectronic nano-circuits”, details Aizpurua.