An international team of scientists led by researchers from CFM, DIPC, and UPV/EHU, has been able to predict and observe the first topological insulator with intrinsic magnetic properties.

The results of this study are being published this week in the prestigious journal Nature, and have great potential both at fundamental level and for future technological applications. 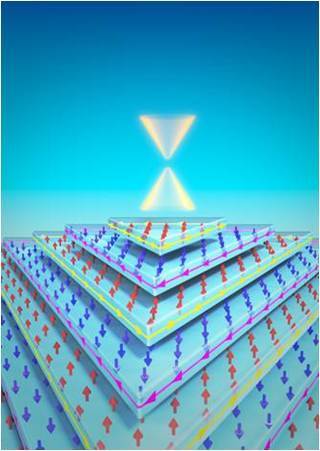 Artistic representation of the stepped surface of MnBi2Te4, and above, the characteristic electronic feature of a magnetic topological insulator (the so-called Dirac Cone). The red and blue arrows refer to the local magnetic moments of the Mn atoms, which show alternate direction from one terrace to the next, i.e. antiferromagnetic order. The yellow and pink lines and their respective arrows show the directions of propagation of the electric currents at the borders, which are opposite between neighboring borders (this is known as Half-integer quantum Hall effect).

The so-called topological insulators are those materials that are insulators in bulk, i.e. do not allow electric currents in its volume, but are conductors on its surface. Unlike the usual conductors, that is, metals, the electric current circulating in a topological insulator does not suffer any loss of energy. This property opens great possibilities of application in electronics, since it would enable the fabrication of more efficient, faster and low-energy consumption devices; an objective as desirable as necessary in the current scenario of the rapid advance of energy demand worldwide, which threatens our environment. For that very reason, the discovery of topological insulators about a decade ago caused a global research boom in the fields of nanotechnology and condensed matter physics. 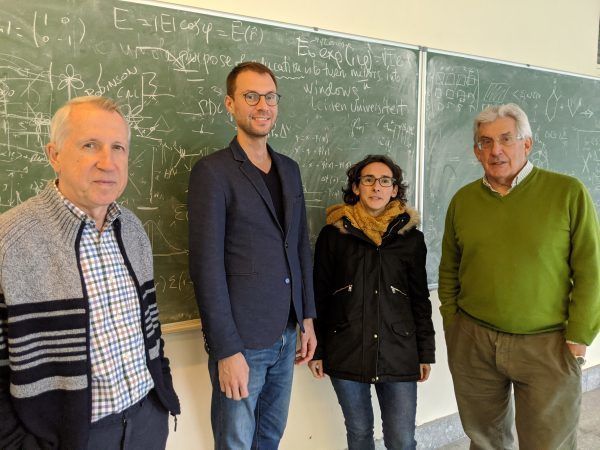 Donostia (Basque Country, Spain) is not only the place where the theoretical prediction of this first magnetic topological insulator has been carried out, but it has also been the base camp from where its experimental confirmation has been coordinated. This work has involved experts in different areas, from leading research centres in Russia, Azerbaijan, Germany, Austria, Japan, Italy, and the USA. The results of this study are being published this week in the prestigious journal ‘Nature’. Otrokov has explained that for experimental confirmation, the first step was the synthesis of the compound crystals by the chemical synthesis experts. Once synthesized, the samples were subject to a multitude characterization experiments; structural, magnetic, electronic, of transport, of atomic composition, etc.; until the predicted characteristics were observed and verified.

The results of the study, which had already been disseminated through an open-access server and lectures delivered by the authors at international conferences, have been well received by the international scientific community. Currently, MnBi2Te4 and other materials based on it are studied in several research centers,  those of the USA and China showing the most intense activity.

“ MnBi2Te4, besides being an intrinsic magnetic topological insulator, has turned out to be antiferromagnetic, just as we had calculated”, Blanco tells us. Antiferromagnetism consists of a magnetic order at an atomic scale, such that the material lacks net magnetization. As a result, these materials are much more robust against perturbations by magnets.

This crystal composed of Manganese (Mn), Bismuth (Bi) and Tellurium (Te) has a great potential both at a fundamental and a technological level. It is extremely rich in exotic properties, for example, such as the various Hall effects, including the quantum ones, some of which are used in the calibration of physical constants for its exceptional precision. In addition, MnBi2Te4 can be used to create the so-called Majorana fermions. This is a kind of particle, a quasiparticle to be accurate, that has been considered the cornerstone of quantum computing. Likewise, MnBi2Te4 is the first intrinsic material for which an electromagnetic response very similar to that of an axion is predicted. An axion is a hypothetical particle postulated in the framework of quantum chromodynamics, and it is a good candidate to solve the problem of dark matter. That is why there are a lot of experiments aimed precisely at detecting signals of axion-type behavior in the family of this compound.

Regarding the practical applications, several devices based on magnetic topological insulators have already been patented. For instance, MnBi2Te4 could be used in chiral interconnect devices, which promise superior performance to the ordinary copper connections currently used in commercially available integrated circuits. Some other applications include optical modulators, magnetic field sensors, and memory elements.

The researchers working in Donostia, together with their network of international collaborators, expect to be able to observe in MnBi2Te4 some of the exotic phenomena mentioned above, and discover new intrinsic magnetic topological insulators with even superior properties than those of MnBi2Te4.