MnBi2Te4 is a material that has a block-layered crystal structure, in which thin laminae made of seven atomic layers, called septuple layer blocks, show strong covalent-ionic bonding inside them and relatively weak van der Waals bonding to the neighboring laminae. In principle, such a crystal structure of MnBi2Te4 facilitates the preparation of thin films with a septuple layer block precision. Concerning its magnetic order, it appears to be an interlayer antiferromagnet, where the ferromagnetic Mn layers of neighboring blocks are coupled antiparallel to each other. 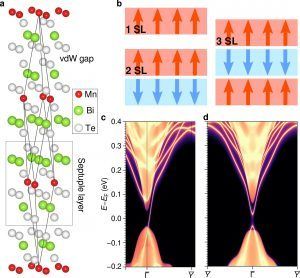 Based on density functional theory and Monte Carlo calculations, we predict the MnBi2Te4 thin films to show a unique set of magnetic and topological transitions as a function of number of septuple layer blocks in the film: while a single septuple layer block of MnBi2Te4 is a topologically trivial ferromagnet, the thicker films made of an odd (even) number of blocks are uncompensated (compensated) interlayer antiferromagnets, which show quantum anomalous Hall (zero plateau quantum anomalous Hall) states. Additionally, the predicted wide band gaps and relatively high magnetic critical points for the MnBi2Te4 films are expected to facilitate the observation of the quantum anomalous Hall (QAH) effect at temperatures significantly higher than those achieved so far, something that would be a significant advance.

From practical point of view, this achievement is also very important since the QAH effect represents a promising playground for the creation of novel devices, e. g., chiral interconnects, expected to outperform ordinary copper interconnects currently used in commercially available chips. Furthermore, MnBi2Te4 is the first stoichiometric material predicted to realize the zero plateau QAH state, which has been theoretically shown to host the exotic axion insulator phase. In contrast to the previously studied sandwich-like FM1/TI/FM2 heterostructures (where FM1 and FM2 are two different ferromagnetic insulators and TI is a nonmagnetic topological insulator), the MnBi2Te4 thin films realize the zero plateau QAH state intrinsically, i.e. without the need of applying an external magnetic field.