An international team with the participation of the Center for Materials Physics in San Sebastián (CSIC-UPV/EHU) and DIPC have created the smallest lens in the world, capable of concentrating light down to dimensions of an atom. Researchers have used gold nanoparticles as focusing lenses that allow to flex individual chemical bonds in molecules.

An artistic composition that shows the effect of light focusing on the daily dimensions of a bulb, down to the atomic dimensions where once localized, it can flex the bond of a single molecule nearby. (Credit: Univ. Cambridge/Bart de Nijs)

For centuries, scientists believed that light couldn’t be focussed down smaller than its wavelength, just under a millionth of a meter. Now researchers from the Center of Materials Physics in San Sebastián (CSIC-UPV/EHU) and DIPC, in collaboration with the University of Cambridge, have created the world’s smallest magnifying-glass which focuses light a billion times more tightly, down to the scale of single atoms.

“Our theoretical models suggested that atoms might act as tiny lightning rods that could localize light to the atomic scale”, continues Prof. Javier Aizpurua who led the theoretical effort of this work, at the Center for Materials Physics in San Sebastian, that predicted the confinement and interaction of light on such tiny length scales.

The experimental team in Cambridge used highly conductive gold nanoparticles to make the world’s tiniest optical cavity, so small that only a single molecule can fit within it, opening up new ways to study the interaction of light and matter. The cavity –called a ‘pico-cavity’ by the researchers – consists of a bump in a gold nanostructure the size of a single atom, and confines light to less than a billionth of a metre. The results are reported in the journal Science.

In the same way, as a hand plucks the strings of a guitar, the energy of light can activate the vibrations of a particular bond in a molecule. This phenomenon is called optomechanical interaction, and in this work, the researchers have achieved that light localized at the picocavity can “pluck” the vibrations of a nearby molecule. This can be understood as the tiniest guitar in the world, a “molecular guitar” activated by light. This molecular optomechanical interaction can be used to switch optical signals, i.e. to “play” particular notes in the molecular “guitar”: certain light plays some notes, and others are not capable to activate them, thus allowing for switching the molecular signal with light at the tiniest scale, the atomic scale.

Building nanostructures with single atom control is extremely challenging and it required cooling the samples to -260°C in order to freeze the scurrying gold atoms. The researchers shone laser light on the sample to build the pico-cavities, allowing them to watch single atom movement in real time. Single gold atoms behave just like tiny metallic basketballs that trap light thanks to the behavior of their electrons roaming around. They used this to blend light together with mechanical springs based on single vibrating bonds, which allows molecular motion to be used for tiny switches. The optomechanical interaction in the tiniest picocavities was reported by monitoring the anti-Stokes signal of a single molecule. The quadratic evolution of the anti-Stokes signal is a clear fingerprint of the effect of vibrational pumping of the molecule’s vibration induced by the picocavity (see Figure B).

The control of molecular vibrations in nanoscale environments has the potential to open a whole new field of light-catalyzed chemical reactions, allowing complex molecules to be built from smaller components, as well as make new opto-mechanical devices. 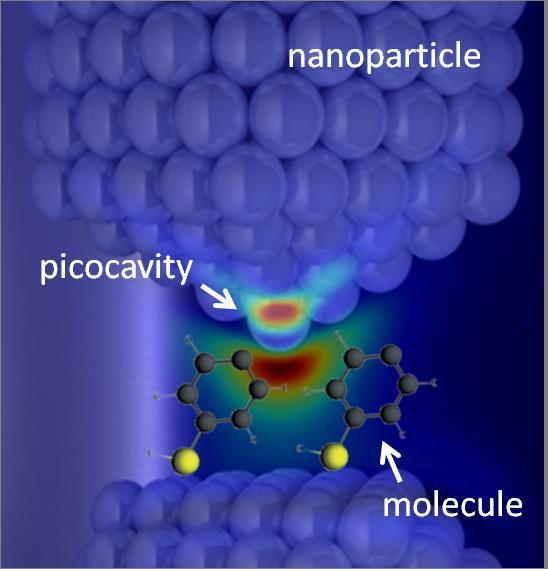 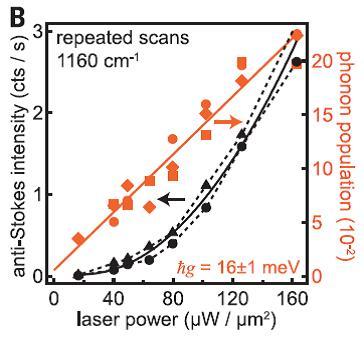 Figure: (A) Artistic composition that shows a molecule in the proximity of a “picocavity” where the field of a plasmonic nanoparticle is focused down to the atomic scale, producing effects of molecular optomechanical coupling. The blue spheres represent atoms of a metallic lattice in a nanoparticle and the local field distribution is represented with red and green colors depending on the intensity of the field, according to ab-inition calculations of the atomic-scale localization of the optical response. (B) Evolution of the anti-Stokes intensity (black line and symbols) of the 1160cm-1 vibration of a biphenyl-4-thiol molecule in a monolayer located in a plasmonic picocavity, as a function of the incident laser power. A quadratic dependence of the aS signal is observed. The corresponding phonon population evolution is depicted in orange.

The research is funded in part by the excellence scientific and technological research program of the Spanish Ministry of Economy and Competitiveness (MINECO, FIS2013-41184-P), the UK Engineering and Physical Sciences Research Council (EPSRC) investment in the Cambridge NanoPhotonics Centre, as well as the European Research Council (ERC), and the Winton Programme for the Physics of Sustainability.